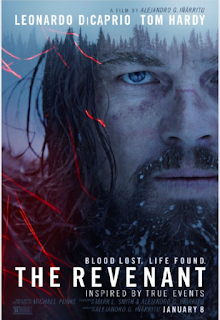 Revenant is from the French, and refers to someone who returns, often a spirit or ghost who returns from the dead. Those who believe in ghosts (friendly or otherwise) will tell you that they return in order to take care of unfinished business. Such was the case with 1820s frontiersman Hugh Glass, who, after being left for dead after a bear attack, returned to avenge his son's death.

The Revenant is, as the advertisements say, inspired by a true story, and it's truly unbelievable. Leonardo DiCaprio plays Glass, who, along with his adolescent son Hawk (Glass is American, Hawk's mother is Native American), is part of a fur-trapping expedition. The American fur-trapping clan are continually at odds with Native Americans, as well as rival French fur companies. (There will be several skirmishes among the three cohorts in different combinations throughout.)

When Glass is mauled by a bear, two of his "colleagues" and his son stay behind under the auspices of seeing him through to his death and giving him a proper burial. Eager to stay alive and get paid, John Fitzgerald (a wily Tom Hardy), tries to coax the immobile but still somewhat cogent Glass to let him put Glass out of his misery. Hawk sees this, and in trying to save his father, ends up being killed by Fitzgerald. Fitzgerald then convinces the other "watcher" that Glass is as good as dead, and that they are in imminent danger. The two flee in the hopes of rejoining their party, and leave the partially buried (alive) Glass for dead.

But Glass is a fighter. He may have seen Hawk's mother killed (we see this in one of Glass's dreamlike visions), and he may have just seen his son be killed, but he remembers the lessons they learned together. At the start of the film, directed by the terrific Oscar winner Alejandro Gonzalez Inarritu (Birdman), we see Glass comfort his son, then just a child, and saying, "As long as you can grab a breath, you fight." This credo remains ever-present as we watch Glass fight (not so much for his life but for his son) to get back to civilization and have a reckoning with Fitzgerald.

As one might expect, Leonardo DiCaprio (Django Unchained, The Wolf of Wall Street) is absolutely fantastic, doing so much with little dialogue. (Based on the novel by Michael Punke, the screenplay is written by Inarritu and Mark L. Smith.) As Glass is on this journey alone—for the most part—he doesn't have much to say; only a lot to do. This is certainly the most physically demanding role of DiCaprio's career, but it's not at all a surprising turn for him. I've always found one of his hallmarks to be a dedication to the craft and a lack of vanity, and that's certainly the case here. You see him display such anguish and determination on his dirty, scarred face, words are unnecessary.

But there's another character. Nature and the elements are Glass's companion and foe, as much as any person, and they look beautiful and indomitable in this beautifully shot film. The highest praise to the Academy Award winning cinematographer Emmanuel Lubezki (Birdman), who made the wilderness, an integral part of Glass's story, stunning. (The story is also aided by Ryuichi Sakamoto's score.) Not only that, but Lubezki and Inarritu set up these phenomenal tracking shots so we are in the thick of it with the characters, we get up close and personal with cliffs that might spare us, or the waters that might send us to our final resting place. It's a necessary element for a story about surviving the elements, and helps the film elicit a powerful, visceral response.