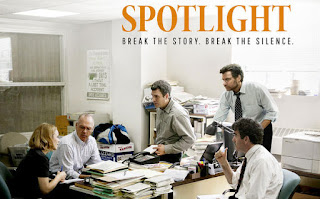 There's been Network. All the President's Men. The Newsroom. Last year's Nightcrawler. All look at the state of the fourth estate. They have different takes, but they make us confront what we expect of journalism. Tom McCarthy's Spotlight follows in that tradition, and it makes a powerful impact.

Spotlight (written by McCarthy and Josh Singer) tells the true story of the Boston Globe reporters who broke the Boston church sex scandal in 2002. The four-reporter team made up the paper's Spotlight division, a vertical dedicated to long-form investigative journalism. There's the self-described player–coach, Walter "Robby" Robinson (Michael Keaton), and his three tenacious team members, Mike Rezendes (Mark Ruffalo), Sacha Pfeiffer (Rachel McAdams), and Matt Carroll (Brian d'Arcy James). The Globe had covered pieces of the alleged sex scandal before, but when the new editor, Marty Baron (Liev Schreiber), arrives, he makes it a Spotlight piece, and the intrepid reporters don't stop until they get the story.

The story isn't just that priests, cardinals, bishops, and others sexually abused young boys (and some girls); it was that there was a massive cover up by the church. It was that these people upon whom the community relies covered up these atrocities, turned the other cheek, and put these monsters in a position to strike again. The cover up is almost as heinous as the crime.

Which is why it is so wonderful that Spotlight shines a spotlight on the power of investigative journalism. These stories are, unfortunately, out there, but we'll never know about them if all our "reporters" cover are listicles featuring 18 Ways to Decorate with Lipstick, or gossip about who's sleeping with whom, or the horse race of campaigns rather than the substance. Journalists have a unique power and, therefore, a unique responsibility to dig and then dig a little deeper and to keep going.

We see that tenacity in the fantastic performances from the estimable ensemble that also includes Stanley Tucci (Julie and Julia), Billy Crudup (Arcadia), and John Slattery (Mad Men). In particular, Oscar nominee Mark Ruffalo (The Kids Are All Right) looks determined throughout; he speaks in a clipped manner, and you'll notice how his lips are continually pursed, as if he's getting ready to pounce whenever the moment calls for it. Tony nominee Brian d'Arcy James (Something Rotten) and Rachel McAdams (The Notebook) are aces, and Oscar nominee Michael Keaton (Birdman) is in top form, especially as the scope of the story reveals itself and he struggles with what he knew, when he knew it, and when he finally started speaking up about it.

McCarthy (Win Win) does a fantastic job of showing just what the reporters were up against. At one point, a character remarks that Boston is like a small town, and McCarthy doesn't miss an opportunity to show how enmeshed the lives of Bostonians are with the church. It's easy to see how the cover up could take place. McCarthy also makes a point, though, of showing that the reporters are part of the community. This is their town, too, and everyone is culpable.

The Spotlight team's work begat more investigations, and during the end credits, we see a list of other places in which sexual abuse was uncovered. The list takes up one screen, then another, and then another. It's a gut punch to see how prevalent this is, and even more gut wrenching to think about what's happening that's yet to be discovered. And that's the power of the press. Someone else might sign their checks, but the journalists work for us. They have a great power; let's hold them responsible for using it wisely.
Billy Crudup Brian d'Arcy James film John Slattery Josh Singer Liev Schreiber Mark Ruffalo Michael Keaton movie Rachel McAdams Spotlight Stanley Tucci Tom McCarthy