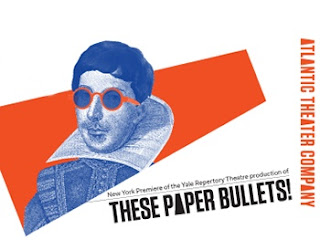 I like Shakespeare. Since high school, I've read the Bard's plays for fun, and I look forward to Shakespeare in the Park every summer. I appreciate productions of his work that try to approximate how the show might have originally been staged (like the recent Twelfth Night/Richard III productions), and I also thrill over productions that re-imagine the text, adding layers and making it relevant and accessible (like Alan Cumming's Macbeth, or the Public's Mobile Shakespeare Unit's production of Comedy of Errors). I also like Green Day, and so I was particularly excited to see These Paper Bullets, a musical adaptation of Shakespeare's comedy, Much Ado About Nothing, with a book by Rolin Jones and a score by Green Day front man Billie Joe Armstrong.

Oof. Was I disappointed.

First, there was a technical issue. The sound mix rendered me unable to hear all the lyrics, an obvious disappointment. Best as I could tell, Armstong's (American Idiot) songs were good, and the highlight of the show. Second, there was the structural issue. Shakespeare's plays have a lot of moving parts, including multiple sub-plots, like those ensemble movies in which we see eight seemingly disparate characters but by the end we see how they connect.

Much Ado follows men returning home from war, and the women with whom they tangle upon said return. Though the "main couple" is Claudio and Hero, what's most memorable, noteworthy, and entertaining is the war of wits between Benedick and the vivacious Beatrice. In These Paper Bullets, the men returning home are a fab foursome, the rock band, the Quartos—Claude (Bryan Fenkart), Ben (Justin Kirk), Balth (Lucas Papaelias), and Pedro (James Barry)—and instead of returning home from war, they're returning home (London, circa 1964) from America, after their British Invasion (think: Beatle-mania).

It's an intriguing and creative approach to Much Ado, and allows for a fun 60s pop pastiche score (I think; as I said, I couldn't decipher all the lyrics), but book writer Jones misses the beat when he does too much to incorporate all of those B– and C–plot lines. I'm thinking, in particular, of the Scotland Yards running bit, which opens the show (in a clunky manner, I might add).

Jones opens the show with two Scotland Yards officials trying to stop the pop takeover—what's happening to the youths?!—and they are soon joined by their bumbling, daft boss, who, for one thing, can't figure out that if he stands in front of the projector, nothing is projected. While the intel they gather will eventually help make for a happy reunion between Claude and Higgy (a delightfully ditzy Ariana Venturi)—that would be Claudio and Hero—each check in stops the show in its tracks. Just as the production picks up momentum and finds its stride, we take a dalliance to Scotland Yards—for too long each time—and must suffer through the inanity.

But that's not where the disappointments end. There is little palpable cohesion throughout the show. The tone is uneven, as some scenes are played with sincerity while others are full of mugging and gags, for example. Director Jackson Gay could stand to set forth a vision for the show. Is she directing a farce or a regular comedy? Is it supposed to be scrappy or polished? It's as if scenes from several shows were stitched together to make this one.

And on top of all that, Justin Kirk (Weeds, The Understudy) was thoroughly disappointing. His aloof performance as Ben/Benedick suggested he was somewhere else, mentally. He was not connecting with his co-stars, though, to his credit, he did seem to groove with his fellow Quartos when they were performing a song. It struck me as too little too late, though, and there was little chemistry between him and Nicole Parker, who played Bea (that would be Beatrice) with sincerity. I couldn't help but think of and long for Hamish Linklater and Lily Rabe, who sparred so deliciously as Benedick and Beatrice in the 2014 Shakespeare in the Park production of Much Ado.

Cheeky Beatles references abound, as do nods to the Bard's canon (that's in addition to the lifted text; this is an adaptation, after all). Bryan Fenkart (Nobody Loves You) stands out as Claude, and his rendition of the 11 o'clock number, a tune he sings to win back Higgy, is heartfelt and solid. Too bad the rest of the show isn't.
Atlantic Theater Company Billie Joe Armstrong Bryan Fenkart Justin Kirk musical off-Broadway Rolin Jones Shakespeare These Paper Bullets