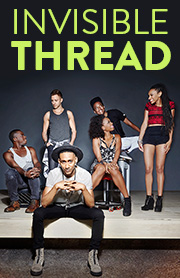 Much of the action of this new musical takes place in Africa, but don’t expect bird puppets flying overhead (like in The Lion King) or wonderfully acerbic satire (like in The Book of Mormon). Instead, Matt Gould and Griffin Matthews’s Invisible Thread is a personal tale of a young African-American man getting in touch with his roots.

Griffin (played by Matthews) is a gay man, a tenor who likes singing in his church choir. He is in a committed relationship with Ryan (Corey Mach), a Jewish white guy. When Griffin comes out to his pastor and the church, he is shunned—and stunned. With Griffin looking for direction, Ryan playfully offers that the Jews will take him. Griffin grimaces, but thinking about the Birthright trip, he decides to go to Uganda and connect with his people.

He is staying at a compound, where his job is to help build a school, but one day, he meets a group of teenagers who challenge him to become their teacher and, unsurprisingly, end up teaching him a lesson.

The long and short of it is that Griffin and, eventually, Ryan develop a relationship with these kids. They learn that there is an invisible thread that connects us all much more than any line in the sand can divide us, making us all responsible for our fellow humans. Directed with sensitivity by Tony winner Diane Paulus (Pippin), the musical is affecting and honest, and was powerful in the moment though, in truth, it’s not staying with me.

Gould and Matthews did what most writers are advised to do: They wrote what they know. The couple took a similar journey, and connected deeply with a group of kids in Uganda. (The piece was previously titled Witness Uganda, by the way.) In the show, we see Griffin and Ryan return to New York and struggle to find the funds to support their African friends’ education. They turn to everyone they know for money, and, at one point, they put on a revue as a fundraiser. With the specter of that event not far from memory, after seeing Invisible Thread it was difficult not to feel like the entire production was an extended fundraiser, a show meant to bring attention to the Ugandans’ situation, and an effort to raise money for the cause.

To be sure, the show appears to have been written with sincerity, and all the collaborators—writers, cast members, Second Stage Theatre—seem fully committed to the project. Yet I can’t shake the feeling that this really is more of a project than a show. 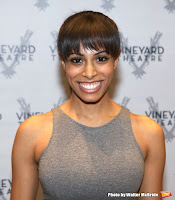 Of course, there is still plenty to enjoy and take to heart. The opening number is energetic and gripping, and there’s a gospel number in the second act that will make you want to stand up and cheer. Nicolette Robinson (Brooklynite) and Michael Luwoye stand out as Eden and Jacob, respectively, two of the teens with whom Griffin and Ryan connect, and Adeola Role is impressive as Joy, the woman more or less in charge of the compound where Griffin stays. Joy has a powerful monologue in the second act, revealing how she came to the compound and what freedom means to her. Bravo to Gould and Matthews for sharing their experience with us, making the connective thread not so invisible after all.
Invisible Thread musical Nicolette Robinson off-Broadway Second Stage