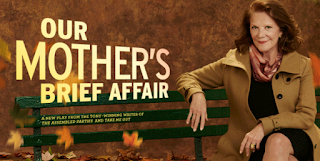 Our Mother's Brief Affair seems likes a fairly straightforward title. And while most of the action of Richard Greenberg's play finds the titular mother, Anna, telling her children, Seth and Abby, about her brief affair with her lover, that's not exactly what this memory play is about. Rather, playwright Greenberg (The Assembled Parties) is more interested in why the mother recounts the affair the way she does. 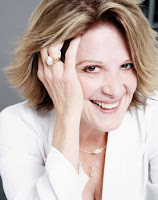 We begin with Seth (Greg Keller, Of Good Stock) giving us tidbits of his mother's personality. Anna (Linda Lavin, Too Much Sun) is there to confirm and recreate the tableaux Seth sets up. Greenberg structures the play so that we continually shift between direct addresses, with everyone telling us what happened and how things were, and fully played-out scenes, with everyone showing us what happened and how things were. (Director Lynne Meadow (Collected Stories) stages the play so that's it easy to keep track.)

Early on, Seth says his mothers is nostalgic for things that never happened. She's a situational liar, he explains, but not a creator of events. Seth, by the way, is an obituary writer. He's used to telling people's stories. One thing that he tells us is that Anna's health is up and down, and in another early scene, once Abby (Kate Arrington, The Qualms) arrives, we see symptoms of Anna's dementia. It's a tiny seed, one that germinates throughout but, from my perspective, never fully blooms.

Which is part of my problem with Our Mother's Brief Affair. So much is left unaddressed. So much of what's truly interesting—family drama, an ailing parent—is unceremoniously forgotten about. Meanwhile, there's a Brechtian tool used to lead us to the revelation that is the overwrought dramatic act break. It's like Greenberg is setting us up for one thing and then oddly moves to something entirely different. That shift is away from children learning about their ailing mother's past and to the children learning a sordid detail about something already shocking.

Shifts, reversals, and twists are all fine and can be thrilling when done right. This didn't work for me. The reveal leads to a second act that focuses on how Anna responded to her lover (John Procaccino, The Qualms) revealing his true identity, and how Seth and Abby respond, often with incredulity, to Anna's reveal. Is Anna telling the truth? Did she react appropriately?

The play ended, and I had more questions. Not because Our Mother's Brief Affair was so provocative or stimulating, but because I wondered, "What was the point?" Was Greenberg simply trying to understand something about his mother? Does it even matter whether or not Anna made up the shocking detail?

I stayed for a talkback (always stay for the talkbacks), and a fellow audience member offered a reason for Anna recalling what she did, and why it matters. Anna, this person said, is a woman who knows she is dying and that her memory is fading (that's that dementia seed starting to sprout). She wants to die as someone memorable. I think that's a great unpacking of the play, and it fits Anna's character. (Seth tells us she was someone who posed, for example.) This perspective makes sense of why Anna would recount her brief affair, and, more important, why she would include (invent?) this detail.

Still, it all felt entirely contrived. With a moment of non-fiction interpolated into this work of fiction, Our Mother's Brief Affair seems more like a writing exercise (for the playwright) or a brain teaser (for the audience) than a well-crafted play, filled with human interest and pathos. There are plenty of credos and syllogisms spewed throughout (like when Abby says you're not nostalgic for the good times; you're nostalgic for the times you know you can get through, for what you survived), which make this seem less like a story about a mother and her children, and more like a playwright trying to say something rather than trying to write a play.
Broadway Greg Keller John Procaccino Kate Arrington Linda Lavin play Richard Greenberg