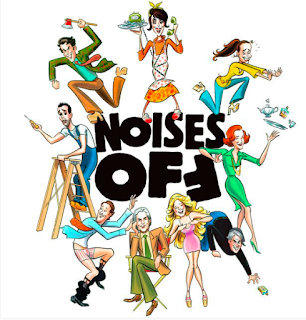 Noises Off, Michael Frayn's backstage farce, has been one of my favorite plays since I was about 11. I remember first being exposed to the movie, and, ever since, I can't get Carol Burnett saying, "Take the sardines" out of my head. (This is a good problem.) I had the pleasure of seeing a production in DC several years ago, and now Roundabout and director Jeremy Herrin are bringing the hilarity to Broadway with a cast that is simply an embarrassment of riches.

At rise, it's the final dress rehearsal before opening night of Nothing On, and director Lloyd (Campbell Scott, a roguish frayed knot) is exasperated. (Herrin has Scott stalking around the theatre, even making his way into the mezzanine so one of Lloyd's cries of despair was delivered right next to me!) Nothing On, the show within the show, is, itself, a farce, and Lloyd's actors and stagehands aren't quite helping the cause.

Dotty (Andrea Martin) can't get her stage directions right (put down the receiver, take the sardines?); her beau, Garry (a great David Furr), natters on and on during each break, but (in a running gag) he can't actually articulate his thoughts. There's the blonde bombshell Brooke (Megan Hilty), who's a bad actress and continually misplacing her contact lenses, and Frederick (Jeremy Shamos), who's continually stopping rehearsal to ask about motivation. The Nothing On cast is rounded out by busybody Belinda (Kate Jennings Grant) and Selsdon (Daniel Davis), the geriatric wandering lush. Stage manager Poppy (Tracee Chimo) is a wallflower, and carpenter Tim (Rob McClure (Chaplin, Honeymoon in Vegas)) is on hand to fix the doors—and to go on for Selsdon, should he go missing.

Then, of course, there's the plot of Nothing On, which is mostly about Yuppies avoiding taxes, a real estate agent trying to boink the cute blonde, the absent-minded housemaid and her sardines, and a harmless burglar. It sounds like a lot to keep straight, but don't worry: you're in great hands.

This is just fabulous. Particularly with a farce, it's all in the timing, and director Herrin gets it just right, especially in act two, when the stage turns around, and we get to see the backstage shenanigans during a performance of Nothing On. (Since they're "backstage" during that act, the cast is mostly silent, though not at all still.) Doors slam at just the right moment; a treacherous phone cord wraps so diabolically around a character; an axe is caught, one-handed, in the nick of time. And this cast.

I knew I would like Tony winner Andrea Martin (Pippin, Act One) and Tony nominee Jeremy Shamos (The Assembled Parties, The Qualms) being funny together, and they didn't disappoint. What Martin can do with a mere eyebrow arch is award worthy, and Shamos is a beast with the physical comedy. I adore Tracee Chimo (Bad Jews, The Heidi Chronicles), who's so sweet and flustered as the intrepid if jilted Poppy. Kate Jennings Grant (The Country House, The Lyons), an actress I usually find to be just serviceable, excels as the "straight man" who finally goes over to the zany side as things unravel.

But the standout is the luminescent Megan Hilty, returning to Broadway for the first time since 2009's 9 to 5 (and since catapulting to fame as one of the few good things about Smash). We knew she was good, but with this role, Hilty raises the bar for comedic acting. She's so deliciously good at playing a bad actress, what with performance tics like exaggerated walks, ridiculous poses, and a penchant for mouthing the other actors' lines. It's a shame that Noises Off is scheduled as a limited engagement, and not everyone will see Hilty's brilliance.