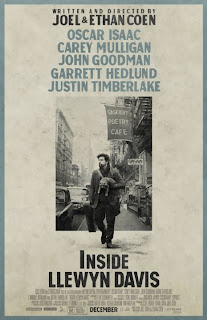 The latest from brothers Ethan Coen and Joel Coen (they of The Big Lebowski, A Serious Man, True Grit and so much more) takes on folk singer Llewyn Davis’s journey. (The film is loosely based on Dave Van Ronk’s memoir The Mayor of MacDougal Street.) It’s 1961 in the Village, and Llewyn is trying to make a living as a solo folk artist, having gained mild success (to put it mildly) as part of a folk duo. (The title refers directly to Llewyn’s eponymous solo album.) Llewyn (theatre veteran Oscar Isaac) couch surfs and lives moment to moment (though not in a live for the moment kind of way; more of an aimless kind of way). He’s strong-headed when it comes to his music and far from a warm and fuzzy guy.

(Even so, as Isaac so sensitively portrays him, there’s something appealing about Llewyn. Maybe it’s just that Isaac (We Live Here, Drive) is so attractive. Or maybe it's that he’s playing an acoustic guitar and I have a thing for musicians.)

Perhaps what’s most noticeable about this film is its aesthetic. The Coen brothers applied some filter or some wash to the film to drain the color. Everything in the movie (shot by cinematographer Bruno Delbonnel) is muted and somewhat bleak. It feels about right for a story of a folk singer who takes responsibility for nothing and is getting nowhere in life.

Several characters (and I do mean characters) come in and out of Llewyn’s life, and as the title might suggest, we see them only through Llewyn’s lens. For example, Stark Sands (AmericanIdiot, Kinky Boots) appears as a military man, Troy, who moonlights as a folk singer. He’s robotic and, as Llewyn sees him, he’s devoid of soul. (Not that he’s a mean dude, just that he’s a simpleton and doesn’t have much going on inside.) Llewyn is baffled when people say Troy connects with audiences. 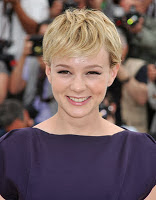 Then there’s Jean (Carey Mulligan) and Jim (Justin Timberlake), a couple and folk-singing duo who sometimes let Llewyn crash on their couch. Timberlake (The SocialNetwork) is fine as the mild-mannered Jim, and Mulligan (Shame, The Great Gatsby) is a spark plug as the jilted Jean.

Coen brothers regular player John Goodman shows up briefly (as does everyone in Llewyn’s life) as a fellow traveler who challenges Llewyn. Ethan Phillips and Robin Bartlett are Llewyn’s posh, UWS friends who let him crash from time to time, and Adam Driver (Girls) appears in a memorable and telling sequence that finds Llewyn sitting in on a session with Driver and Timberlake for the original tune, “Please Mr. Kennedy.”

The music throughout is mostly early folk, under the guidance of T-Bone Burnett (Crazy Heart). The thing about folk music, and it’s sort of the thing about the film and Llewyn’s journey, is, as Llewyn says in the film, “if it was never new and it never gets old, then it’s a folk song.” The songs Burnett compiled (he also wrote, with Ed Rush, George Cromarty, Timberlake and the Coens, the original “Please Mr. Kennedy”) make you feel that, and the way they’re used throughout the film make Inside Llewyn Davis feel like a legitimate musical. (Marcus Mumford, of the band Mumford and Sons, served as associate music producer on the film, and helped arrange some of the songs. The Punch Brothers also appear on the soundtrack.)

If you’re a music fan or a Coen brothers fan, this could be for you. (There’s plenty of off-beat and oddball humor to go around.) In their most deliberately structured film to date, the Coen brothers prove with Inside Llewyn Davis that some things were never new and they’ll never get old. They just exist.