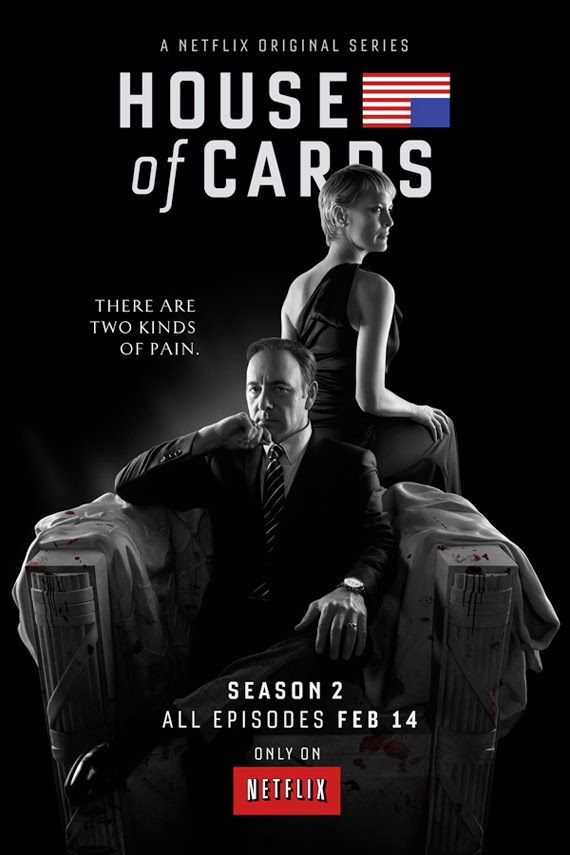 (Scroll down for the official trailer for House of Cards, season 2.) 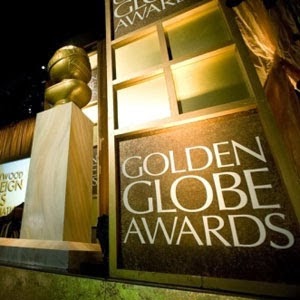 Award Season Round Up
Golden Globes—The Golden Globe awards will be handed out this Sunday night. Tina Fey and Amy Poehler are back to host the starry gala. The Wrap reports that Jennifer Lawrence (American Hustle); Jimmy Fallon; Mila Kunis (Ted, Black Swan); Reese Witherspoon (How Do You Know?); Modern Family's Julie Bowen; Colin Farrell and more will present awards. Later in the week it was announced that Tom Hanks, Seth Meyers, Margot Robbie (The Wolf of Wall Street) and Mark Ruffalo (The Kids Are All Right), among others, will also present. Check out the list of nominees, then head to Vulture and The Hollywood Reporter for their "who should win" picks. Tune into NBC this Sunday at 8pm EST to find out whom the Hollywood Foreign Press Association has decided to honor. (Late-breaking news: Globe nominee Leonardo DiCaprio will present at the Globes!!! (So will the delightful Drew Barrymore.))

BAFTA—The nominees for BAFTA's Rising Star Award were announced earlier this week. Among the nominees are Lupita Nyong'o (12 Years a Slave) and Dane DeHaan (The Aliens, Kill Your Darlings). Indie Wire has more.

Later in the week, the rest of the BAFTA nominees were also announced. It's interesting to note that Dallas Buyers Club, and particularly its stars, Matthew McConaughey and Jared Leto, were left off the nomination list. They've been showing up just about everywhere else. Variety has the full list of nominees; here are some:

Oscars—Academy Award nomination voting ended on Wednesday. (The Hollywood Reporter's Scott Feinberg mused about voters' habits, and on Vulture, Kyle Buchanan took a look at the field.) Votes, which are weighted, will be tallied this week before Oscar nominations are announced, by Chris Hemsworth, on Thursday, January 16. I'll have a full report. In other Oscars news, Feinberg says that Keith Stanfield hopes that his rap, "So You Know What It's Like," from Short Term 12 (starring Brie Larson and John Gallagher, Jr.), will follow in the footsteps of "Lose Yourself" and "It's Hard Out Here for a Pimp." Speaking of original songs and the Oscars, The Wrap's Steve Pond offers his opinions on the 75 eligible songs and lists what he thinks are the frontrunners, including "Let it Go," from the animated film Frozen, written by The Book of Mormon scribe Bobby Lopez and his wife, Kristen Anderson-Lopez. In other Oscar news, Rolling Stone's Peter Travers wonders if Leonardo DiCaprio can pull out a nomination, let alone a win (for his performance in The Wolf of Wall Street), in an already crowded and competitive field. Plus, the official Oscars poster, featuring host Ellen DeGeneres, has been revealed. What do you think?

AARP Awards—Yep, AARP hands out awards. This week, the group announced its winners, who will be celebrated in a February 10 gala in LA. Winners include: 12 Years a Slave (Best Movie for Grownups); Judi Dench (Best Actress, Philomena); The Way Way Back (Best Comedy); and American Hustle (Best Time Capsule). Variety has the full list of winners.

Directors Guild—The DGA announced its nominees for its annual awards. They are Alfonso Cuaron, Gravity; Paul Greengrass, Captain Phillips; Steve McQueen, 12 Years a Slave; David O. Russell, American Hustle; and Martin Scorsese, The Wolf of Wall Street. As The Wrap notes in its coverage of the nominations, the deserving, crowded field meant that several solid contenders (and Oscar hopefuls) were left off the list. Among those who might have nabbed a nom are Joel and Ethan Coen, Inside Llewyn Davis, and Spike Jonze, Her. The Wrap also notes that this is Scorsese's 11th nomination.

(The DGA also announced its nominees for directing achievement in television. Bryan Cranston is a double nominee, having directed episodes of both Breaking Bad and Modern Family. Directors who worked on House of Cards, Game of Thrones and The Daily Show with Jon Stewart, among others, were also nominated. The Wrap has the full list of nominees.)

In miscellaneous award season news, there's a lot of buzz about Matthew McConaughey and his McConaissance. Rolling Stone recently caught up with him to talk about Dallas Buyers Club and The Wolf of Wall Street, as well as his new HBO series, True Detective. (And, apparently, Liza Minnelli thinks McConaughey is aces. The Hollywood Reporter's Scott Feinberg quotes the legendary performer as saying to McConaughey, "Honey, if you don't win the Academy Award, I'm giving you mine!")

Leo Talks to Ellen
Amid the award season hoopla, Leonardo DiCaprio stopped by The Ellen DeGeneres Show on Tuesday to talk The Wolf of Wall Street...and about the time he survived a shark attack! DiCaprio is nominated for a Golden Globe (winners will be honored this Sunday night), and DeGeneres will host the Oscars on March 2.

Casting Updates
Broadway—The terrific Jim Norton (The Mystery of Edwin Drood) has joined the company of Of Mice and Men. Norton joins the previously announced James Franco, Chris O'Dowd and Leighton Meester. The revival will play at the Longacre Theatre; previews begin March 19 and opening night is set for April 16. The limited engagement is scheduled to conclude on July 27. Broadway.com has more. 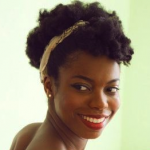 Television—SNL is adding a new cast member to its ranks: Sasheer Zamata joins the cast, becoming the first black woman to join the cast since Maya Rudolph departed the late night sketch series five years ago. Zamata is a graduate to the University of Virginia and has been cutting her teeth at the Upright Citizens Brigade in New York. She'll make her SNL debut as a featured player on the January 18 episode. Deadline has more. (In addition to Zamata, The Hollywood Reporter reports that SNL has also added two female black writers to its writers' room.)

Broadway—Karen Ziemba, a Tony winner for Contact, has joined the company of Bullets Over Broadway, the stage adaptation of Woody Allen's film. Ziemba joins the previously announced Zach Braff (Trust, All New People), Betsy Wolfe (The Last Five Years), Marin Mazzie (Next to Normal) and others. Bullets, directed and choreographed by Susan Stroman (Big Fish), is set for the St James Theatre, where previews will begin on March 11. Opening night is scheduled for April 10. Broadway.com has more. 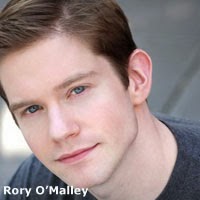 Off-Broadway—Spring Awakening alumna Phoebe Strole (The Metal Children) has joined the cast of the latest from David Henry Hwang, Kung Fu, about to be given a world premiere at Pershing Square Signature Center. She is joined by Jon Rua (Hands on a Hardbody) and others. Broadway.com has details.

Broadway—Cinderella is welcoming new cast members and welcoming back an original. Joe Carroll (Romeo and Juliet) joins the cast as Cinderella's prince, Topher, taking over for Santino Fontana. Tony nominee Victoria Clark (The Snow Geese, Sister Act) rejoins the cast, once again portraying the fairy godmother. Todd Buonopane joins the cast as activist Jean-Michel while ensemble member Stephanie Gibson moves up in the ranks to play Cinderella's step-sister, Gabrielle. Broadway.com has more on the comings and goings at the Broadway Theatre. 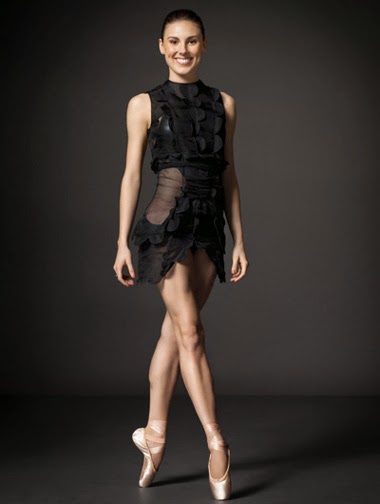 Tiler Peck Lands on Forbes's 30 Under 30 List
The talented and busy New York City Ballet principal dancer, Tiler Peck, has found her way onto the Forbes 30 Under 30 Who Are Changing the World list. Peck is in the Hollywood and Entertainment sub-list, along with, among others, Rebel Wilson (Bachelorette), Michael B. Jordan and his Fruitvale Station director, Ryan Coogler, Jennifer Lawrence (American Hustle), and Anna Kendrick (50/50). In addition to continuing to dance with the company (and planning her wedding to fellow principal dancer Robert Fairchild), Peck is slated to star in the world premiere of the musical Little Dancer, a story loosely about Edgar Degas to be directed and choreographed by Susan Stroman. (The musical, with eyes on Broadway, will debut in DC this October; I have info here and here, and there's additional information on the Kennedy Center's website.) 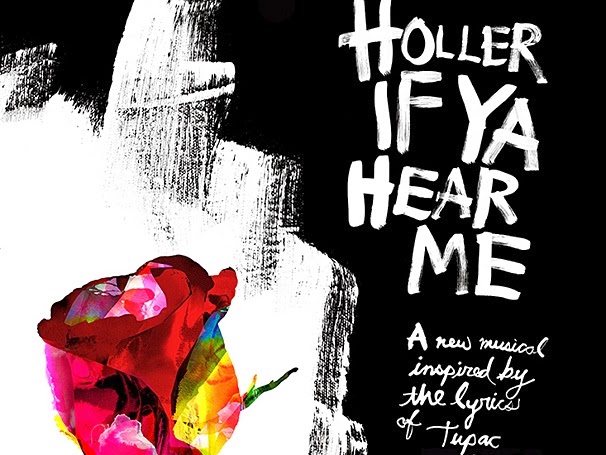 Tupac on Broadway
If his hologram wasn't enough for you, here's some more Tupac. A new musical, Holler if Ya Hear Me, inspired by the late rapper's lyrics, will hit Broadway this spring (though it won't land on the Great White Way until after the 2013-2014 season concludes, making it ineligible for 2014 Tonys). Holler is directed by Kenny Leon (Fences) and features a book by Todd Kreidler. It will play the Palace Theatre (recently home to Annie) with previews beginning May 26. Opening night is set for June 19. Casting has not yet been announced, but visit Broadway.com to learn about the creative team.

Tony Award Rulings
The Tony Awards Administration Committee met again to determine eligibility of 14 Broadway productions. Unless noted below, all eligibility determinations are consistent with opening night credits; that is, actors billed above the title are eligible for lead actor/actress nominations and actors billed below are eligible for featured actor/actress nominations. Tony Award nominations will be announced on April 29 and the awards will be handed out on June 8.

More Waiting
The repertory productions of Waiting for Godot and No Man's Land, starring Sirs Ian McKellen and Patrick Stewart, have extended again; the productions, which also star Shuler Hensley and Billy Crudup (Arcadia, The Metal Children) will now run through March 30. In addition to the extension, the schedule is changing such that for the final two weeks, Godot will be performed six times per week while No Man's Land will be performed twice. Broadway.com has more.

The End of an Empire
The acclaimed HBO series Boardwalk Empire will conclude its run after the upcoming fifth season. The series, which centers on the rise of organized crime in Atlantic City and features "appearances" by up and coming gangsters like Al Capone, Lucky Luciano and Meyer Lansky, just finished its fourth season this fall. Series creator Terence Winter (The Wolf of Wall Street) says, "...we've decided to wrap up the series after such a great run and look forward to bringing it to a powerful and exciting conclusion." Boardwalk Empire stars Steve Buscemi and has won 13 Emmys, including one last year for Bobby Cannavale. Deadline has deatils. 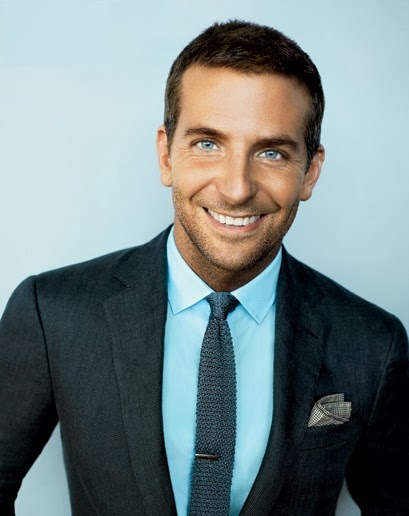 Bradley Cooper Headed Back to Broadway?
The Academy Award-nominated actor (who is up for a Golden Globe on Sunday night) is eying a return to the Great White Way. Cooper (Silver Linings Playbook, American Hustle) made his Broadway debut in 2006 in Three Days of Rain (alongside Julia Roberts and Paul Rudd) and has continued to be keen on theatre since. In 2012, he starred in a Williamstown Theatre Festival production of The Elephant Man (alongside one of my favorite actresses, Patricia Clarkson (Shutter Island)) and expressed interest in bringing it to Broadway. Politics came into play and a transfer was delayed, but Cooper recently told the Daily Mail that once he finishes filming Clint Eastwood's American Sniper, the play will open on Broadway. Stay tuned for details. 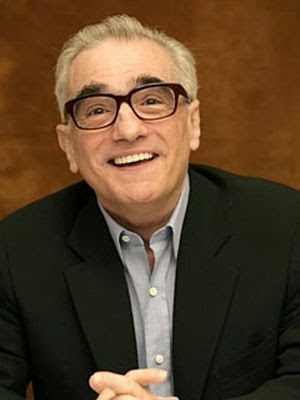