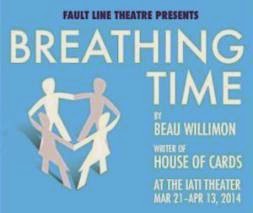 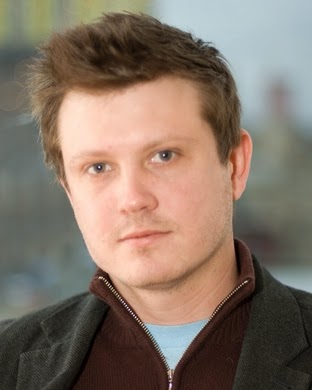 With Breathing Time, Beau Willimon has crafted a thoroughly engaging, provocative play about human connection. Genuinely funny at times, poignant at others and deliciously acerbic in between, Breathing Time is, essentially, a character study seeking to find out what happens when strangers are thrown together, linked by a bond of shared experience.

The three-scene play (directed by Aaron Rossini) begins with the arrogant Jack (Craig Wesley Divino, who delivers with a smarmy yet appealing performance) walking into the office he shares with Mike (Lee Dolson). Jack is still hungover from the previous night’s festivities, but he has an important, possibly career-changing presentation to give in one hour and fourteen minutes. (Jack’s precise and, in this play, timing is important.) Most of this first scene, which takes up the majority of the play, is deceptively innocuous—two guys nattering on about this or that. Some exchanges are raunchy and funny, others are sincere and intense, but the point is that these two—who work in the same office but don’t actually work together—have a bond.

Next we meet Denise (Shannon Marie Sullivan) and Julie (Molly Thomas). They are meeting for the first time and though they’ve never met, they, too, are connected. The third scene is a coda, a nice, hopeful punctuation that ties drives home the idea that we all want to connect with someone.

As we left the theatre (Breathing Time is a Fault Line Theatre production running at Teatro Iati in the East Village), my friend and I debated the order of the scenes. He said he felt the first and second scene should have been flipped. I couldn’t articulate why I disagreed with him, but I did.

Meanwhile, I couldn’t stop thinking about the Machiavelli quote Jack memorized: “War should be the only study of a prince. He should consider peace only as a breathing-time, which gives him leisure to contrive, and furnishes as ability to execute, military plans.” When I arrived home and was ruminating on this quote, apropos of nothing (consciously) I turned on the Arvo Part music that’s used in Christopher Wheeldon’s After the Rain. And then it hit me.

After the rain. Of course the scenes had to be in that order. The play is really about the women, about the human connection and wanting to truly know the people in our lives. How we form bonds with people because we have to, because it’s the only way to survive in a world full of less and less breathing time. Bravo to Willimon and the entire Breathing Time company for bringing this fiercely honest expression of the human condition to us.
Beau Willimon is the author of Farragut North and Spirit Control. He adapted the former into the movie The Ides of March, and is the creator, head writer and showrunner of the superlative Netflix series, House of Cards.
Beau Willimon Breathing Time House of Cards off-Broadway play