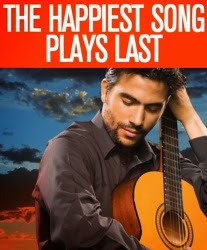 Herein, a brief review of the third in Quiara Alegria Hudes's "Elliot Trilogy," the second of which, Water by the Spoonful, won the Pulitzer Prize.

In The Happiest Song Plays Last, we once again check in with former Marine Elliot (Armando Riesco) and his cousin, Yaz (Lauren Velez). It's 2011 and Elliot is making a film in Jordan while Yaz is back home in North Philadelphia, entertaining tales told by her colorful neighbor, Agustin (Tony Plana). Though they're in seemingly disparate worlds, both Elliot and Yaz are still trying to fully understand community and their place in it. Dovetailing into that journey are Elliot and Agustin's quest to leave a legacy.

As written by Hudes, directed by Ruben Santiago-Hudson and performed by a good group of actors (aided by renown musicians Nelson Gonzalez, Nelson Jaime and John Rodriguez), The Happiest Song... is a good play. It's well-crafted, sharply written; it's meticulously directed; it's acted with sensitivity. But I just didn't like it.

Maybe "like" isn't the right word. Perhaps it would be more accurate to say that I simply didn't connect to it—I didn't feel engaged in the story. Which is not a knock on the story itself or the execution of it. This just isn't my cup of tea. But, objectively, it's a good play and continues the community theme that was front and center of Water by the Spoonful. (I haven't seen the first of the trilogy, so I can't comment on how this final play relates to it.) Job well done to the company, but this just isn't for me.

(By the way: After the performance I stayed for a post-show talk back with the writer and director. The discussion confirmed that I "got" the play, and, in doing so, confirmed that it simply wasn't my taste.)
off-Broadway play Quiara Alegria Hudes Second Stage