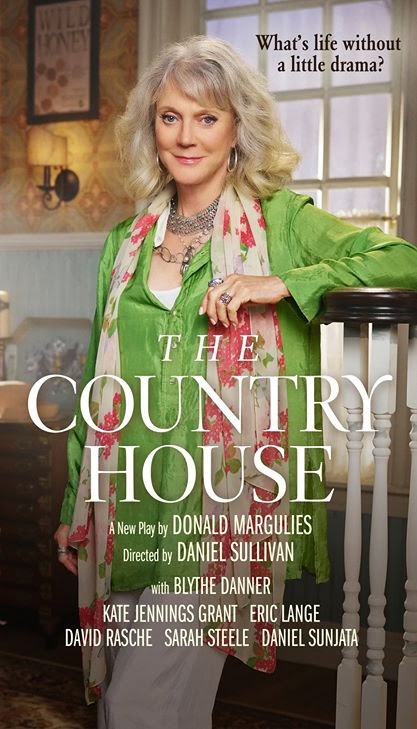 I like playwright Donald Margulies. Many of his works, like Dinner with Friends and Collected Stories, have long-been among my favorite plays, and even newer works, like Time Stands Still, impress. So I was particularly looking forward to seeing his latest, The Country House, which is now on Broadway after a stint at LA's Geffen Playhouse.

Starring Blythe Danner and directed by Daniel Sullivan (Orphans, Time Stands Still), I was disappointed by Margulies's effort. The general themes revolve around relationships, but the specifics make this a somewhat trite play, especially for a writer of Margulies's caliber.

Danner plays actress Anna, and she and her family have gathered at her country house, near where the Williamstown Theatre Festival is held, on the occasion of the one year anniversary of the death of her daughter.

Assembled are Anna's son, Elliot (a terrific Eric Lange), a non-working actor and budding playwright, and her granddaughter, Susie (Sarah Steele), whose mother is the one who passed, and who wants nothing to with entertaining as a profession. Susie's widower father, Walter (David Rasche, Little Miss Sunshine), a successful film director, has come to lend moral support to Susie, but he brings his young fiance, Nell (Kate Jennings Grant, The Lyons), also an actress, along for the extended weekend. And TV star and family friend Michael (Daniel Sunjata, Macbeth) is around, at Anna's invitation, and you can probably make some educated guesses about what happens. They all move efficiently toward a melodramatic but fitting and satisfying ending.

Throughout, the characters pontificate about theatre and showbiz, and while I happen to agree with much of what they're bemoaning, such dialogue sounds more like a device than a natural conversation, especially because the play is really about the family's loss and coming to terms with life now. It sounds so somber to tell it, but the underlying problem is that there's actually little gravity in the piece. Despite the potential for high drama and deep explorations of love and loss, this slick play doesn't do much digging below the surface.