Award Season Updates
SAG Awards
The SAG Awards were handed out on Sunday night, and while there were few surprises, there were some nice moments. Read my Wrap Up for full red carpet coverage and the complete list of winners, and below check out some extras from around the 'net.

This week's Feinberg Forecast (in which The Hollywood Reporter's awards guru, Scott Feinberg, surveys the week gone by and what impact it has on the Oscars race) notes:

While not a nominee this year, the one and only Barbra Streisand will perform on the Oscar telecast! The last time Babs performed on the Oscars was in March 1977; she sang "Evergreen," the Oscar-winning song from A Star is Born (and also my parents' "first dance" song!). Of Babs's appearance, Oscars co-producers Craig Zadan and Neil Merson said in a statement, "In an evening that celebrates the artistry of movies and music, how could the telecast be complete without Barbra Streisand?" Agreed! (Maybe she'll sing with host Seth MacFarlane? I like it when he sings.) 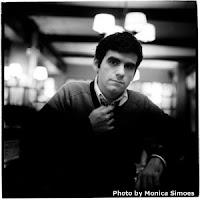 Joe Iconis in the News
Broadway.com introduces you to the new songwriters - like Joe Iconis - that will be featured on this season of Smash, which comes back to the airwaves on Tuesday, February 5. Iconis is also featured in the New York Times; at the Times's request, Iconis penned a song about Mayor Michael Bloomberg! Check it out.

House of Cards
House of Cards, the new Netflix-exclusive series, is being released today. Beau Willimon (Farragut North, Spirit Control, The Ides of March) is the head writer and showrunner, and he spoke with Salon about the show and politics. (Willimon is a campaign veteran, having cut his teeth as a wunderkind on campaigns for Hillary Clinton, Chuck Schumer and Howard Dean.) Several theatre veterans appear in the show (which stars Kevin Spacey, Robin Wright and Kate Mara), including Sebastian Arcelus (The Blue Flower), who spoke to Broadway.com. And if all that pedigree isn't enough, David Fincher (The Social Network) directed and is an executive producer of the show. Fire up your Netflix streaming subscription and tune in!