Oscars Prep
The Oscars are this Sunday night (!!!) so here are some last minute bits of info to help you prepare for Hollywood's big, glamorous night.

In other award season news, the WGA handed out its awards last weekend. Some winners are listed below; find the full list of winners on the WGA site.

The Last Five Years - On Stage and On Screen
On Stage: The Second Stage revival of The Last Five Years begins is just a couple of weeks, and the venerable off-Broadway company released a third in-rehearsal sneak peek at the show. In this clip, Jason Robert Brown directs Betsy Wolfe (Merrily We Roll Along, Mystery of Edwin Drood) in "Goodbye Until Tomorrow." Watch, and then head over to 2st.com to purchase your tickets. (Preview begin March 7; Brown wrote the show and is directing this production, which also stars Adam Kantor.) 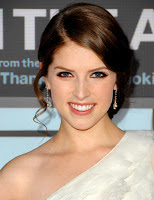 On Screen: It's confirmed that Anna Kendrick (Up in the Air, 50/50) and Jeremy Jordan (Newsies, Bonnie and Clyde) will star in the film adaptation of Jason Robert Brown's The Last Five Years. Playbill has details. I like Kendrick (and she proved her vocal chops in the silly and fun Pitch Perfect), but Jordan? Ugh. His belt is awful and he always looks like he's straining - like he's not using his voice properly. I think it's a lousy choice (especially after Jonathan Groff did this). Of course I'll see the film, and hopefully I'll be pleasantly surprised. (Did you know that original The Last Five Years star Sherie Rene Scott is one of the movie's co-producers?)

Checking in with Smash's Stars and Creative Team
I won't lie to you dear readers, I'm not in love with the new season of Smash, though I do love hearing Joe Iconis tunes on national TV. That said, some wonderfully talented people work on the show and here's what some of them had to say:
Tune In Alerts