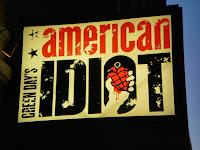 Broadway Idiot
The documentary film, chronicling Billie Joe Armstrong's journey from a punk rocker recording the seminal Green Day album American Idiot to a Broadway star, packing St James Theatre for American Idiot's Broadway run, will be out on October 11 (in theaters and through various On Demand services). The doc features Armstrong and his band mates, Tre Cool and Mike Dirnt, as well as the stage show's creative team, including director Michael Mayer and composer Tom Kitt (a genius). (B-roll footage shows actors John Gallagher, Jr., Rebecca Naomi Jones, Tony Vincent and more!) Head to Rolling Stone to check out an exclusive clip of the creatives recording "21 Guns," and then look for the flick on October 11! (Visit broadwayidiot.com to learn more about the film.)

New York City Ballet Spotlight
The 2013-2014 season is underway with fall performances. So far, I've had the pleasure of attending the Fall Gala performance, which included a world premiere from Justin Peck, and the Just for Fun program, which included Christopher Wheeldon's Carnival of the Animals, a whimsical piece I'd never seen before. In other NYCB news, Pointe magazine checked in with Teresa Reichlen for an article about "willowy powerhouses" (Reichlen is a tall woman). Meanwhile, Tiler Peck continues her "Tiler Talks" column for Body Wrappers (in the most recent entry, Peck talks about the gala), and Sara Mearns took part in Fall for Dance, helping to premiere another brand new Justin Peck ballet. The fall season continues through the middle of the month. Visit nycballet.com to learn more and to purchase tickets. (Also: Nutcracker tickets are now on sale.)